How an auction works

An auction usually closes at 17 p.m. (UTC+1 Rome) on the first day after the domain recovered. The calendar, which can be consulted at the following address (calendar page URL), highlights in green the possible auctions end days.

When a last minute bid has been submitted (it means less than one minute from the auction expiration), the auction will be automatically extended by 5 min; this rule will be maintained until an auction ends.

Each day a maximum of ten auctions are concluded, in the order in which they were created. The closure of any auctions that exceed ten will be postponed to the first possible day (subject to the aforementioned limit of ten) and duly communicated.

Rules to determinate who wins an auction

The buyer who has submitted the highest bid wins the auction.

How is the price from winning an auction established

The user who wins an auction must pay a price according to the these rules: this price is not higher at the maxinum offer presented by the same user. The price is equal to the value of the second highest bid added to an increase which is determined on the basis of Table 1. If, for example, the two highest offer were: 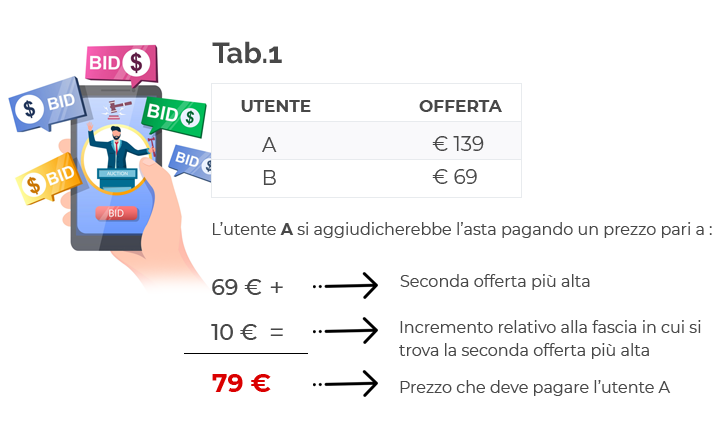 This method to determinated the price is called Proxy Bid.

The first user who books a domain, will automatically participate in the auction for the same domain with a starting offer equal to the price when he booked.

Minimum value of an offer

Once the auction has started, any user enabled for the Service will be able to participate by sending a maximum offer which minimum value is determinated according the following rules:

The platform will automatically raise a bid according to the maximum offer entered by the user. The raise will be made in accordance with two rules:

Minimum amount of user credit to participate in an auction

The minimum amount required is 0 €.

Is there a limit on the number of offers a user can submit?

What if nobody bids at auction

An auction that closes without further bids other than the initial ones, is assigned to the user who first booked the domain.

The user who wins the auction has seven days to settle the debt. After seven days DomainAuction will contact the users, in order of value of the last offer made. The first available user will win the auction at a price equal to the value of the immediately lower offer added to an increase according to the rules described above. In the event that no user was more interested in the domain, it would be put up for auction.